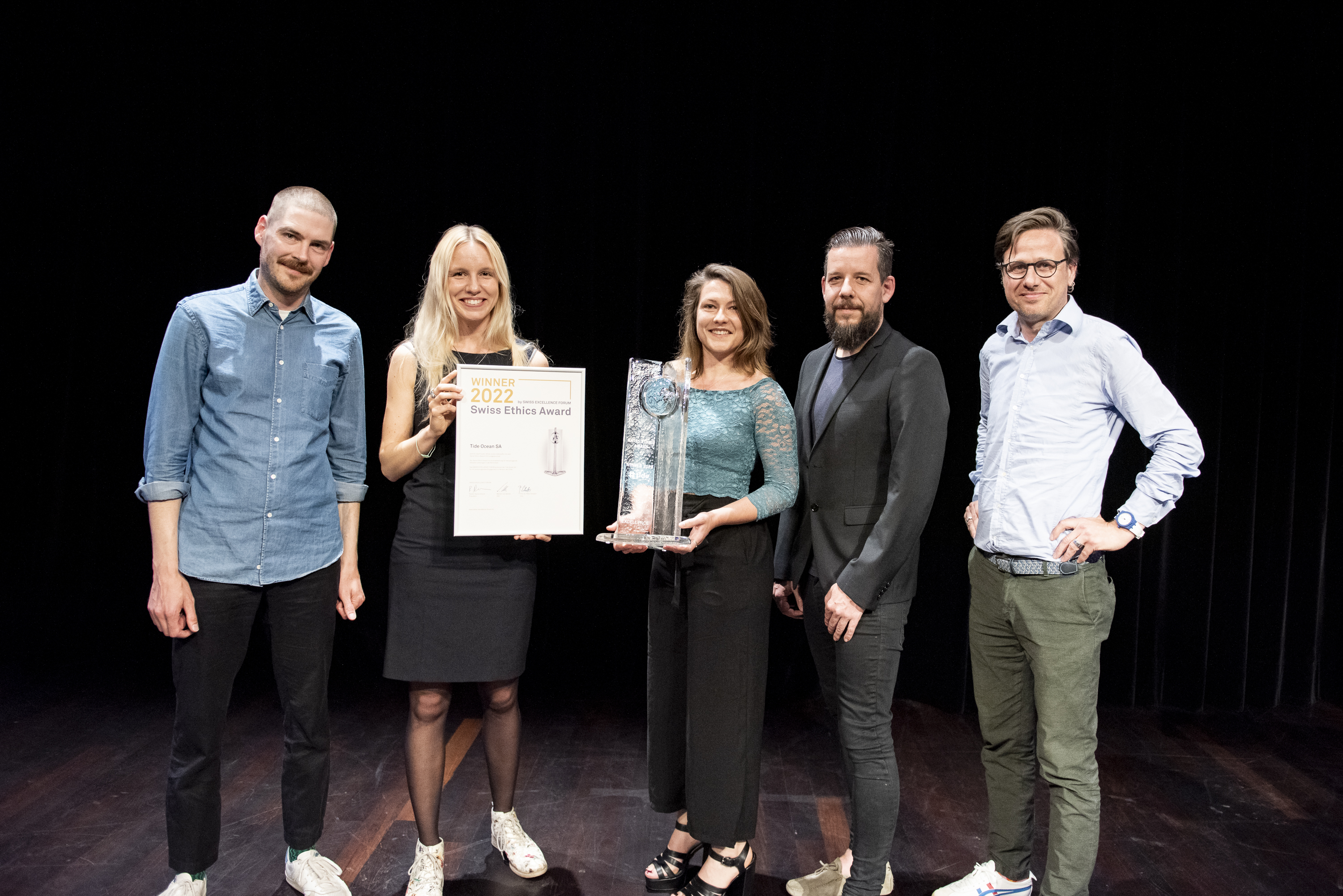 The Swiss Ethics Award 2022 goes to Tide Ocean SA. With this award, the Swiss Excellence Forum honors outstanding ethical achievements in business. At the Future Leadership Conference in the KKL Lucerne, a jury of experts presented the award to #tide founder Thomas Schori.

The speaker of the Jury continued: "#tide succeeds in processing collected plastic waste into a high-quality raw material that can be used in a variety of ways - not only for PET, but also for other types of plastic that can easily replace brand-new plastics in the sense of a circular economy."

The jury praised the ecologically and socially holistic and internationally scalable business model, "which is committed to ethics in a true and exemplary sense." After all, the recovery of waste and its reprocessing goes hand in hand with the integration of socially disadvantaged population groups.

"We want to create an impact by turning a problem into a solution."
Thomas Schori, CEO & Founder #tide

CEO Thomas Schori expressed his thanks on behalf of the entire team: "The nomination alone was an acknowledgement. Winning this award confirms that we are on the right track: We want to protect the environment by giving waste a value, close the loop, save fossil resources and create jobs at the same time. Everyone should benefit from this idea: the environment, the animals, the people."

Accordingly, Tide Ocean SA wants to share this recognition with all those who have contributed to its establishment in the first three years: First and foremost the local partners in Southeast Asia, where under the leadership of Dr. Michel Pardos a network has been created along the coast and on islands in the Andaman Sea, a network that includes fishermen, communities and social enterprises. Also invaluable is the cooperation with the Jan & Oscar Foundation, founded by Laurence Pian, which supports the population with its local teams in Ranong and the surrounding area. The professional processing of plastic waste would not be possible without the close cooperation with scientists and plastics technologists from the IWK under the lead of Professor Daniel Schwendemann (OST).

Last but not least, we would like to thank all our customers: By using #tide® ocean material, brands and manufacturers contribute to the economic success and growth of our company.

In good company: Weleda, Coop or Migros were previous winners

The Swiss Ethics Award is based on the Swiss Ethics Model, a methodology for assessing and developing the ethical performance of organisations in business, administration and society. The model was developed on a scientific basis and is closely linked to the UN's Sustainable Development Goals. The Swiss Ethics Model can be used as a steering instrument to achieve these sustainability goals. In the past, the prize went to Weleda AG, Migros or Coop and Remei AG.